Friend of the coop, Ben Smith, has been on another mountain biking adventure! Here he’ll go through part one of his trip:

Having visited the Lake District last year (you can read part one and part two if you’re interested) I fancied taking things up a notch so booked myself a trip to Snowdonia to see what the Welsh mountains had to offer.

I decided to invest in some new kit to prepare for whatever lay ahead so first of all my old XC helmet was ditched in favour of a modern lid which covered far more head area with significantly thicker material.  A new 22 litre capacity hydration pack provided sufficient space to stow extra clothing and food for the unpredictable conditions and long outings I was expecting.  An extra Gore-Tex jacket and some waterproof shorts were included for obvious reasons – and finally an upgrade to twin piston disc brakes with larger discs for increased stopping power and heat dissipation to help cope with what I’m hoping are going to be some challenging descents.

Of course there are many fantastic mountain biking opportunities in Snowdonia but in this blog I’ll be recounting my first visit to Mount Snowdon itself and then covering an alternate route in part two.

If you fancy visiting Snowdon on a bike it is essential to note that for the sake of walker safety and ranger / biker relations, bikes are prohibited on the mountain between the hours of 10am and 5pm between the months of May and October.  It also makes sense to avoid weekends if possible and also to keep group sizes to a minimum in order not to intimidate the many walkers who visit this famous peak.  I certainly wouldn’t attempt this in wet weather either as I’m sure the rocky ground would become dangerously slippery.

So, it’s late on Monday afternoon, and I decide to begin by investigating the Ranger Path which starts from the Westerly side of the mountain and is renowned for being one of the quieter routes up.  The area at the start of the path is indeed very unassuming save for a small youth hostel with a car park and as I start my climb I pass just a handful of people walking the other way.

The trail starts smoothly enough and despite being a bit of a test remains a nice gravelly surface which zig-zags slowly towards the summit.  Although the muscles are already burning, there are a few relaxing stretches where one can admire the stunning scenery in relative comfort.

As the middle section of the climb approaches it’s clear things are about to change – you would have to travel hundreds of miles to find a higher peak to climb and unsurprisingly that means there is going to be no easy way to the top.

Time to get off and carry the bike!  The gradient is steep, the smooth track is a distant memory and the rocky steps up the boulder strewn trail are large and irregular.  What’s more, the 5pm start adds another dimension to the climb.  In normal circumstances I would have taken a well earned rest at this point but the fact I need to get up and down the mountain before dark means I must keep moving if I’m to enjoy any time at the top.

The path continues to zig-zag but where the chicanes at the base of the climb were a pleasant novelty it becomes quite disheartening having to walk in the opposite direction to the summit!

As I move into the third quarter of the climb I’m able to switch from carrying the bike to pushing and encouragingly it looks like this section of the path is going to be rideable on the way down despite it being quite loose underfoot.  The structures located on the summit are visible but it’s clear I still have a lot of work to do to get there.

Approaching the top, the path merges with the other routes, I reach a signpost pointing to the summit and it’s time to cross the railway track.  It’s nice to be able to get back in the saddle again for a while and the adrenalin does a good job spurring me on to the finish.

Psychologically however, the final stretch turns out to be particularly brutal.  The sign to the summit gave the impression I was a lot closer to the top than I thought and this fact paired with the increasingly punishing gradient catches me off guard – but of course there is no question of turning back now and with one final push I finally make it to the top!

On reaching the very top I’m subjected to the kind of changeable conditions I had been expecting. Having had a reasonably calm ascent, as soon as I reach the top I am immediately battered by incredibly strong wind.  My larger back pack demonstrates its value now and it’s time to dig out my extra layers of clothing and some food.

I’m acutely aware that I’ve no idea how long it’s going to take to get back down so I decide not to hang around too long despite the incredible view and get going with the descent, the first third of which is mostly about picking my way down carefully.

The middle third – well, it’s time to get off and push again although the relative ease with which I traverse this section makes me wonder how it felt so hard getting up it.  That’s gravity for you I guess!

The final third and it’s back on the gravel track.  The combination of the evening time and the Westerly facing trail make for a great sunset cycle and you should be able to see by the look on my face in the final picture what kind of time I’ve had cycling down!

This was such a great ride I feel I could happily repeat it daily but decide to return in a couple of days to give my legs a chance to recover before I try it again and in the second part of my blog I’ll be taking a look at the Llanberis Path which turned out to be very different. 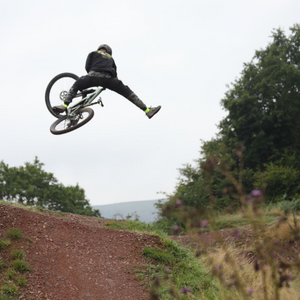 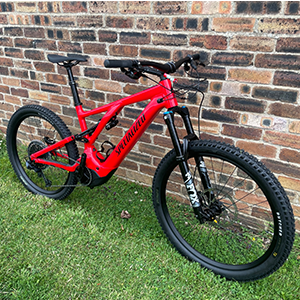 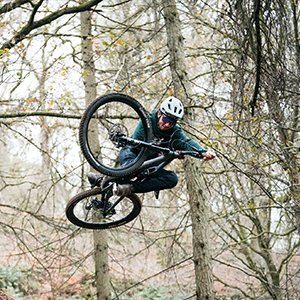