Welcome to the Co-op's own 'I'm new to cycling and I don't know what type of bike I should buy' guide. Here you'll find the main types of bikes that people tend to speak about, demystified. Think of it as the ultimate bike types guide for beginners!

We usually recommend that you buy a bike for the kind of activity you want it for - although if you want to buy a bike just because you like the way it looks, that’s fine too! Do you want a bike mostly for commuting? Do you want a versatile bike that can handle both tarmac and dirt tracks well? Do you want to dress head-to-toe in lycra and attempt the land speed record? Many people who are new to cycling often opt for a mountain bike, purely because it somehow sounds like the most familiar. However, there’s really no need to buy a mountain bike unless you a) really like mountain bikes for whatever reason or b) want to go mountain biking. Here at the Co-op we tend to divide our bike types into the following categories based on the activity they’re used for:

We’ll look at each of these in turn so you can get a better idea of what bikes are used for what. 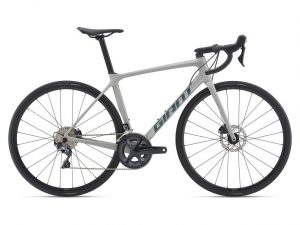 Instead, road bikes are designed to help cyclists get the most out of the road, including the particular geometry (i.e. frame shape) of the bike, the width of the tyres, and the weight of the components. And just in case you were wondering; You won’t be able to buy a road bike with skinny tyres and transform it into a mountain bike by putting big, knobbly tyres on. Mountain bike tyres just won’t fit on, full stop.

Defining characteristics: A lightweight frame, skinny tyres, drop handlebars (those are handlebars which curve back down underneath themselves) and a high gear ratio (i.e. The gears are set up to favour the ones that help you go really fast, if your legs and lungs are up to it.)

Get a road bike if: You want fast, efficient cycling on tarmac roads for commuting, competing, or for fun.

Don’t get a road bike if: You want to take it off the road. Skinny tyres means you won’t really be able to use a road bike on anything other than tarmac. Icy roads can also be a problem for road bikes.

Mountain bikes are designed to go on mountains or on off-road trails, which means they’re chunkier, have knobbly tyres on them, and a frame geometry which makes them better suited for seriously uneven terrain. 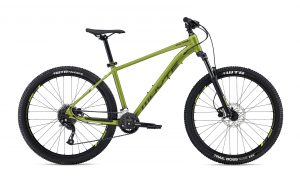 Defining characteristics: Wide, knobbly tyres for traction, and a wide range of gears to help you get up and over mountains or across fields. Some bikes have front suspension but are rigid at the back (‘hardtail’), and some have front and rear suspension for cushioning jumps and drops (‘full suspension’ or ‘full sus’). Others have neither. Here's our Guide to full suspension vs hardtail.

Don’t get a mountain bike if: You want to go fast on tarmac roads, cycle long distances, or mostly knock about town.

Hybrid bikes, or commuter bikes as they’re also known, are essentially a mixture between road bikes and mountain bikes. They give you the versatility to do a bit of everything. What you sacrifice in terms of speciality, you gain by being able to do what you want, when you want. 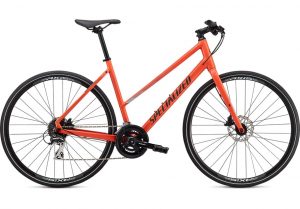 Defining characteristics: Hybrid bikes have flat handlebars instead of drop handlebars. Some models have front suspension to cushion bumps in the road or on the track, and others don’t. They’re designed with versatility and comfort in mind, so they have the comfortable geometry of mountain bikes but with slicker, narrower tyres. The tyres can be changed for more offroad tyres if you want to do a bit of off-roading, or slicker tyres if you’re commuting on tarmac, or something in between.

Get a hybrid/commuter bike if: Your main use for the bike will be commuting and/or knocking about town, as well as occasionally going off road or mountain biking.

Don’t get a hybrid/commuter bike if: You want to go full lycra and ride as fast as possible on roads, or tear down mountain bike trails as dexterously as possible.

Also simply known as ‘Gravel Bikes’, these are bikes which follow the tradition of road cyclists in the olden days, who would swap their slick road tyres for knobblier tyres and continue to train during the winter months. A gravel road bike could be the perfect year-round bike for you if you’re looking for a fast road bike that will cope with off-road excursions. 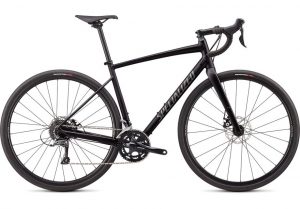 Defining characteristics: The easiest to spot is the drop handlebars like a road bike, instead of the flat handlebars of a hybrid. Like a hybrid, there’s also enough clearance (space around the wheel) for knobblier tyres and mudguards. A gravel bike has more of a road bike feel than a hybrid does.

Get a cross bike if: You’d like a road bike with drop handlebars but you want to go on the odd off-road excursion.

Don’t get a cross bike if: You want a really fast road bike, or a rugged mountain bike, or a hybrid with flat (instead of drop) handlebars.

Folding bikes, of which the Brompton brand reigns supreme, are designed to fold up into a compact size so that you can store them away when you’re not using them, or cycle to the train or bus station and fold them up once you get there. They also fit neatly into a car or hall cupboard. 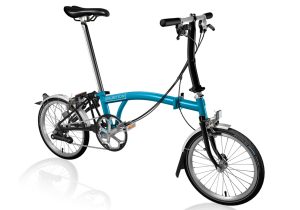 Get a folding bike if: You want to start cycling on your commute but it’s a bit far, or you want to own a bike but have zero storage space.

Don’t get a folding bike if: You want to go off road or go really fast.

Electric bikes are, as the name suggests, part electric. They have a battery and a silent motor, and because of this they’re heavier than other bikes, but you’ll never curse a hill again in your life.

When you start pedalling, the motor ‘kicks in’ and gives you a push as if you had a fierce tailwind at your back, meaning you can essentially go anywhere at a steady pace without breaking a sweat. (Under UK legislation, the motor has to stop helping you once you hit 15.5mph, so you won’t get the chance to rocket uphill at 60mph just in case that was your intention.) The most popular models are hybrid/commuter bikes, but electric mountain bikes are also popular with those who love the downhill bit but aren’t so fond of the uphill, and now there are electric road bikes too.

Defining characteristics: A hybrid, mountain or road bike with a battery and a motor.

Get an electric bike if: You want to go twice the distance for half the effort.

Don’t get an electric bike if: You want to ‘feel the burn’ and develop thighs of steel. See E-bike Jargon Buster for lots more info on e-bikes.

Women’s bikes are designed for women, insofar as they come in smaller frame sizes and a different frame geometry to that of a ‘men’s’ bike. Sometimes they have a step-through frame, which were originally designed for their advantage to riders wearing dresses or skirts. 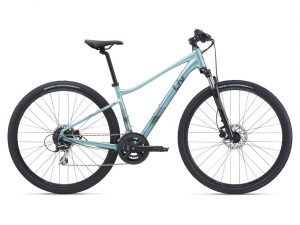 Defining characteristics: Smaller and lighter frames with a shorter top tube (crossbar), a wider and shorter women’s saddle, and often narrower handlebars with grips that are narrower in diameter.

Get a women’s bike if: It offers you the best combination of fit, comfort and style.

Don’t get a women’s bike if: The geometry doesn't suit your requirements.

Touring bikes are like road bikes that have been specially adapted to carry loads over longer distances. They’re designed for long days out where stability, practicality and rider comfort are as important as performance, and they take pannier racks, mudguards and slightly wider tyres. Often, they double come with steel frames for comfort and strength.

Defining characteristics: Drop bar or flat bar bikes with wider tyres, space for mudguards and panniers, and designed with long-distance comfort in mind due to a more upright sitting position.

Get a touring bike if: You plan on going long distances, you want a commuter with the option of touring one day, or you want to load your bicycle up like a Tibetan Sherpa.

Don’t get a touring bike if: You think you’d do better with a specific road, mountain, hybrid or cross bike.

Kids bikes are for kids, but you can get one for yourself just for fun and we won’t tell anyone. Whether you're looking for a balance bike for a 2-year-old (i.e. no pedals), a trail centre-competent junior mountain bike for an 8-year-old, or a road bike for a 12-year-old, we’ve got a superb range of bikes for boys and girls of all ages at the Co-op. 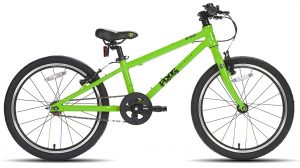 Get a kid’s bike if: You’re a kid or there's a kid in your life who wants a bike! (What kid doesn't, right?)

Don’t get a kid’s bike if: A small adult bike might suit you better.

Take me to all bikes 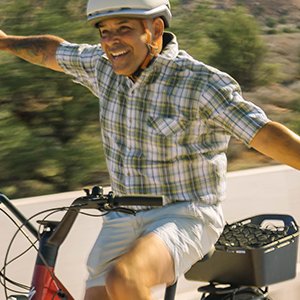