Claire is an Edinburgh cyclist and recent electric bike convert after we let her borrow an electric bicycle for a whole week. She runs the Edinburgh Belles on Bikes chapter for women cyclists who want to enjoy days out on bikes with plenty of cake stops. You can receive free banter from Claire on Twitter @crabbitcopy.

Having had a shot of the Kalkhoff Pro Connect i8 e-bike for a full week, I am a complete convert to electric pootling. When I had to give the leccie bike back to the Edinburgh Bike Coop, I did so with a heavy heart whilst wondering how on earth I’d be able to write a review that is even more glowing than a bioluminescent jellyfish at a rave with lightsticks. I’m not sure I’ll be able to capture just how brilliant this kind of bike is, but here we go.

The only downside I can think of when it comes to an e-bike is that it makes your face hurt from grinning. While I zoomed about the city on this fabulous steed, I must have looked slightly unhinged from all the grade A smiles plastered across my face. My occasional squeals of delight probably startled pedestrians, and my surprised laughter would likely have tinges of derangement to the non-electric-bike initiated.

I cannot stress how much fun an e-bike is. This mode of transport is absolutely hands down the most journey-related fun ever. It beats planes, trains, trams, cars, roller blades and, I hesitate to say it but it’s true, it even beats the ferry on fun points. If you want to get from A to B in an aura of blissful enjoyment, then I suggest you buy an e-bike right now.

Life before an e-bike was pretty good. I cycled as my main mode of transport to get around Edinburgh via meetings, work, the shops, friends’ houses and so on. But life with an e-bike is pretty amazing, because getting about with electric assist is even easier than it was when I was 100% self powered. All the good things about cycling are amplified by an e-bike (see mad smiles above), and all the things that people perceive as barriers to riding were greatly, greatly reduced.

With electric assist, you can pedal to wherever you’re going, wearing whatever you want, by whatever route that pleases you in record speed. I spent a week in my everyday clothing, routinely destroying serious blokes in their lycra finery as my bike coasted up the Mound and other steep Edinburgh landmarks. I really enjoyed getting to places without arriving with a sweat moustache. I cycled into headwinds, feeling the air in my hair without a grimace in sight. I chummed my faster, stronger and fitter other half through the week and not a single snarky comment was exchanged because I kept up with him no bother. I went shopping and loaded panniers up with tins, bottles and boxes of cat food and cycled home without a single expletive exiting my lips. Even cycling in Edinburgh’s traffic was considerably less stressful, because it was much easier to keep up with the flow of vehicles and zip away from traffic lights or junctions.

"I am gutted I had to give the bike back; 100% home grown pedalling just doesn’t have quite the same kick as getting pushed along by electrons."

By some engineering magic, the bike knows when you need a helping hand and will kick in when needed. There are three settings: “Here’s a wee push” (30% assist), “Let’s go halfers” (50% assist) and “Put your feet up pal, I’ll take it from here” (70% assist). I have no shame in saying I spent almost the entire week on 70% and it was blimmin’ brilliant. There is also dynamo lighting, shocks to combat Edinburgh’s endless potholes, a kickstand and eight gears so if you feel like giving it some welly you’re welcome to. If you need to charge it, you plug it in like you would your phone. It’s all very simple.

While immensely enjoying my e-bike for the week, a few folk condescendingly told me that I was cheating. I figure if riding an e-bike is cheating then put me down as the next Lance Armstrong. By that argument, anything that isn’t 100% self-propelled transport is cheating – no planes, trains, cars or wonderful ferries allowed. In fact, let’s just forget electricity altogether because that’s cheating, too. As far as I am concerned, using an electric cycle of any kind (could be two-wheeled, trike, cargo bike, adapted bike…) is the very opposite of cheating – it makes cycling completely accessible.

Even if you discarded the enormous amount of fun they provide, I’d still be a complete convert for the ebike’s ability to make cycling an option for so many people. I am gutted I had to give the bike back; 100% home grown pedalling just doesn’t have quite the same kick as getting pushed along by electrons. If you’ve been thinking about going electric for whatever reason, all I can say is plug yourself in and get pedalling – you will have an electrically assisted blast. 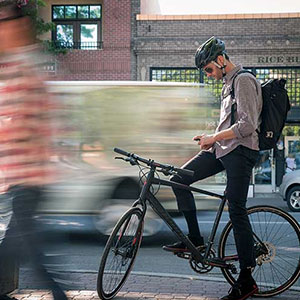 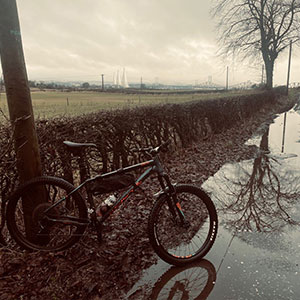